Next project - The Master Bedroom...

There's been a lot going on around here. Don't mistake my silence for inactivity. Far from it. I've been so busy, it's been hard to stop and put finger to keyboard.

I set myself a deadline of the end of January to finish working on the ARMOIRE.  (Post to follow...)
I missed that by two weeks but I have a good excuse.
I rediscovered the joy of tapestry! I found this... 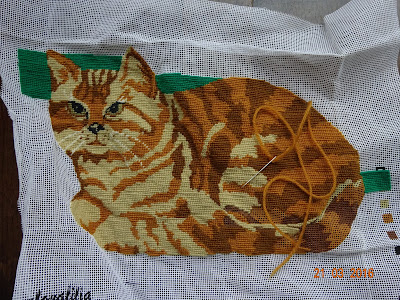 ...lurking in my sewing stash and thought it should be completed to add to the tapestry stash. You know it makes sense. If I'm going to be Britains leading patchwork tapestry bag-making-upholsterer-extraordinaire when I grow up, it has to be done.

I swear I lost two weeks and may have a slight hunch now but I thoroughly enjoyed myself. And of course it's not finished because I'm on the background now and that is very boring indeed.

But what was the armoire deadline all about? It was the only thing standing between me and starting the WALK IN WARDROBE in the master bedroom. I was itching to get cracking.

But what did I do instead? I built a bed. From scratch. I'm not sure if it was procrastination or fear of starting a bigger job but it seemed sensible. I bought a fancy (and scary) new saw so I figured I'd cut my teeth (no pun intended) on that, building furniture that would be masterfully hidden by upholstery.

Jason was going away for a few days so I thought it would give me ample time to get it completed as a surprise when he actually thought I was building a walk in wardrobe.
No, I didn't think that through.
Who would rather choose a bed over a walk in wardrobe?
Nobody, that's who.

And why, I hear you cry, if it's not still the seventies, would anyone dream of building a bed from scratch?

Well, I'll tell you. I recently replaced my silly little French bed with a proper English brass bed, and went from zero storage to 576 litres. It's a lot like having an extension! I can store so many boxes of fabric and wallpaper and tapestry and books and you name it. It's under there. 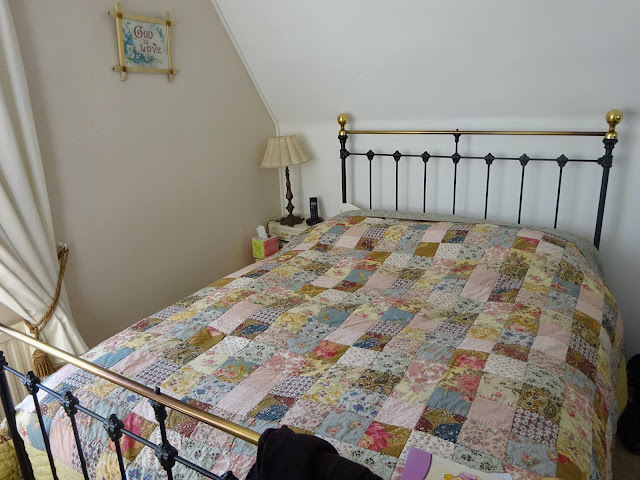 Plus it's so high, you just need to swing your legs out on a morning and you're almost standing up. It's a beautiful thing.

So in the master bedroom, (He snores. LOUDLY.) Jason had a king size divan bed from our last place that was too large for the room. It was low and had those crappy drawers that fall apart when you over fill them. And of course I over filled them. Plus the mattress was kind of sunken. That bed had had it's day.

We wanted a very particular bed-


I couldn't find what I wanted.
My Dad always built beds at home. He built us bunk beds, then a double with built in bedside tables, then a kingsize.

So I decided to have a go. Here's the design...


{Technical details - I needed chunky wood for the outside frame, stud timber for the two central supports, floorboards for the slats, timber for the battens at each end for the slats to rest on, and chunky wood for the legs. I used joist hangers to hold the cross braces in place and coach bolts to hold the frame to the legs. Cost = £110 which would have come in much lower if Jason hadn't refused to drive with wood sticking out of the boot. I had to get more short pieces with more wastage.}

My lovely friend Jane came over to supervise my first cuts of the saw. I went from terrified to madly in love in the time it took me to do a few cuts. That saw is spot on.

It all went swimmingly until one corner just wouldn't square up. I realised that the wood was a bit warped and it wasn't my shoddy carpentry. Anyway, as I said, this bed is not designed to be a thing of beauty. I was planning to make a fitted valance to hide the whole thing. 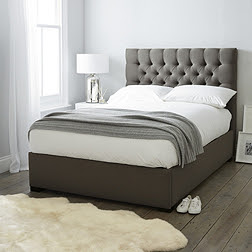 Costing squillions from the White Company, it was my inspiration. I wasn't planning on upholstering it quite like this but this was the look I was after. Except not that headboard.

Want to see mine? 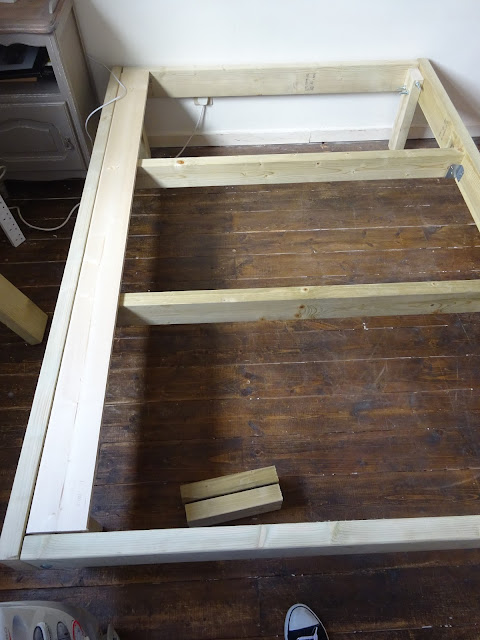 I've only one floorboard slat in place at this point. The rest were screwed on with gaps between as mattresses need circulation. I took photos but they vanished.

I told you it wasn't a thing of beauty. It was also a little lower than I was expecting. Which, when it's made to measure is ridiculous. But measuring is my weakness.

Another disaster; there was a slight cock up with the mattress I ordered as I got the date wrong by a week. So poor Jason returned late from Europe to find he was sleeping on the old mattress on the floor which wasn't quite the exciting surprise I'd planned. Oops.

So the next job was the valance. This was a freaking NIGHTMARE. It took longer to make than the bed. I ripped seams out time and time again.

Lessons learned - Never, ever under any circumstances work with velvet again. Right sides together, the pile makes it move. I had to hand tack all the joins and it still moved.

It does look luxurious though. I got it at our local market, it's very thick and actually fire retardant so I can do a headboard with it if my other plan fails. I bought enough fabric just in case.

So here's a close up of the valance... 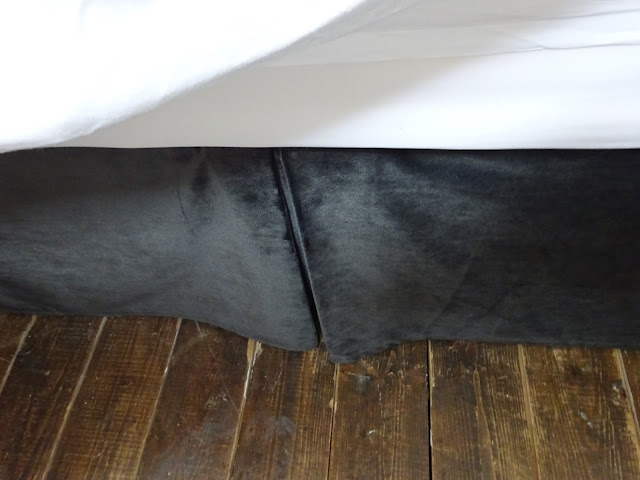 Forgive the floor. This room needs EVERYTHING doing to it. 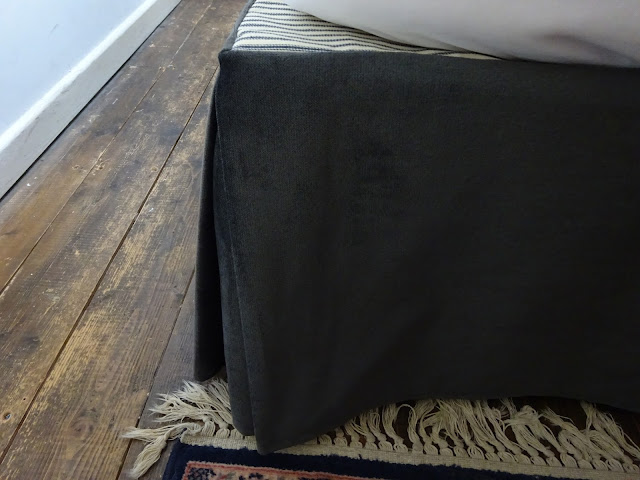 It's not perfect but it serves its purpose. 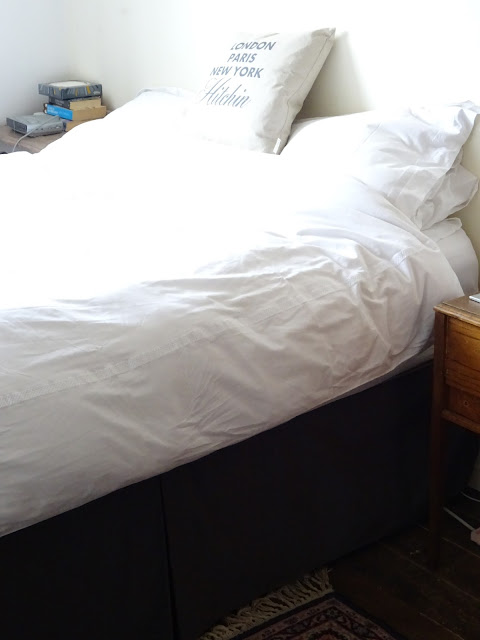 Underneath, it's suitcase city! 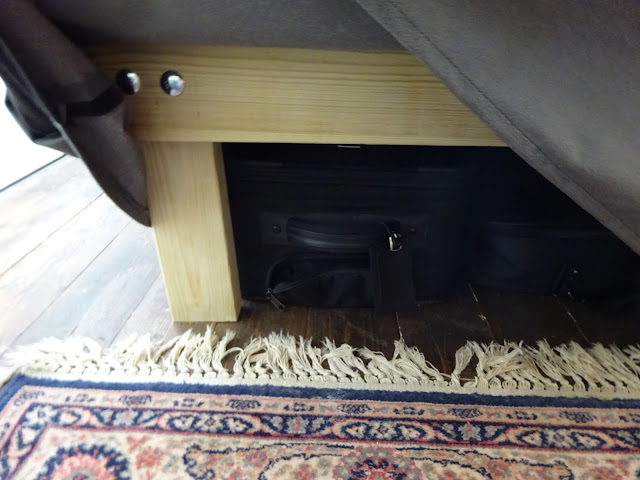 The storage is deep enough luckily but we could have increased that space by using a less deep frame. Doh.

So next on the agenda is the headboard. I'm stalling because there's a lot of horrid measuring and spirit levelling. 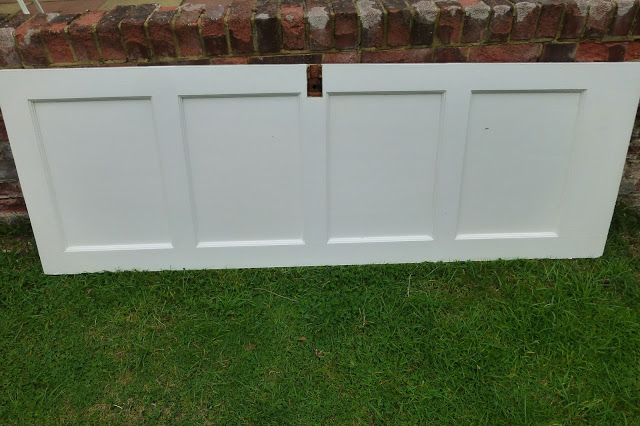 I first told you about HERE.
I've already cut the door down as it was one panel too long. 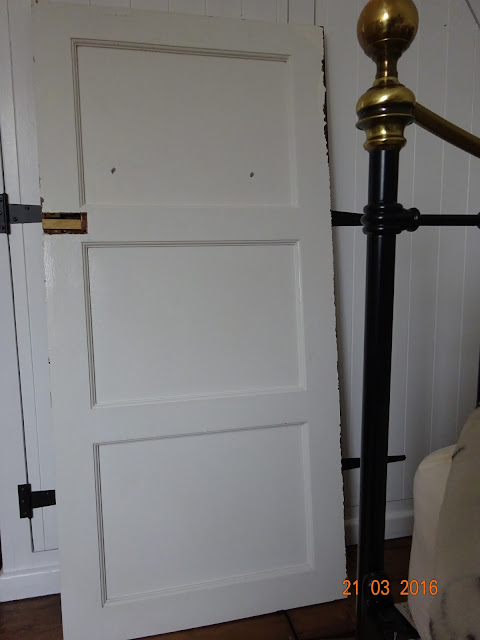 And I stripped it because the paint was peeling off. 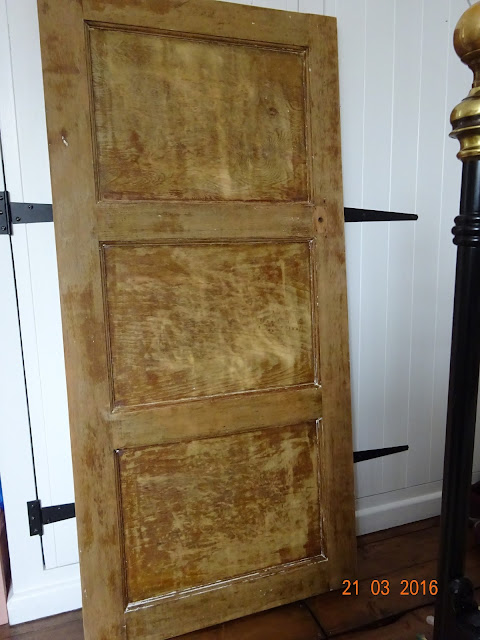 Huge improvement. Not! Watch this space to see if my plan works and I can turn it from a sows ear to a silk purse!

By the way, UK residents, you might have heard of an American show called Fixer Upper with Joanna and Chip Gaines? I found it on ITV BE so you can catch up on there and DROOL along with me!

Right. Headboard. Wish me luck...
Posted by Emma Kate at Paint and Style at 10:35

Email ThisBlogThis!Share to TwitterShare to FacebookShare to Pinterest
Labels: Building a bed