I have REALLY loved this series. I recorded every episode so that I could watch it after my daughter was in bed and give it my full attention. Telly hasn't been this exciting since the days of 'Change That'.

I found myself judging the designers on their own homes, hoping the one that appealed to me the most would win their heat.

Sarah Moore (Sarah Moore Vintage) excited me as her own home was to die for. Vintage florals were everywhere and they showed her staircase...

...which I recognised having previously seen it on Pinterest.

In episode two we met Susan with her eccentric style, daring paint effects and her bright red lipstick.
In  the sun room episode Amys home was delightful and she looked every inch the beach babe.

Sometimes it felt as though the quest to find something innovative overruled the quest for good taste. Emma's (Ooh Betty)  episode being one case in point. Her finished room was exquisite, tasteful and fit the brief 100%. Her client seemed to get choked up as he was so pleased. I'd have been well chuffed living there. Unfortunately she didn't go through. Luke won with furniture for cats to climb on.

Kimberly was so lovely and she scraped through her heat despite running a massive three hours over time.
Helen was so gorgeous I found myself wondering if I would look that good with a crew cut. She reminded me of Emma Thompson.
And Johnny. What a character he was. I cheered out loud when he got through his heat.
Jordan and Alice were great to watch. Poor Alice had to deal with a rental property with a HUGE pine built in unit so it wasn't really a level playing field at all.

The thatched cottage quarter final irked me as again, mad innovation won out over good taste. I bet that yellow horse lamp went straight to the charity shop after the filming was over and I didn't feel Jordans end result was quite right for the cottage. I loved Sarahs, Johnnys and especially Charmaines end result far more.

The mini history lesson at the start of each episode became quite tedious but the BBC have to make a certain amount of programming that's educational so I guess it ticked that box for them.

So tonight is the much anticipated semi final! Who will win?

Well, I think they ALL could.

Come on BBC, you have unearthed not only talented designers but some really watchable characters. I would be glad to see any of them on another interiors show.

Perhaps you can bring back 'Change That' or 'Changing Rooms' with your new found designers? In these frugal, upcycled, home spun times you would be fools not to.

Just watched the semi finals. I'm gutted for poor Luke. I think what totally stole the show for me was Daniels trousers. Looking forward to the finals tomorrow! 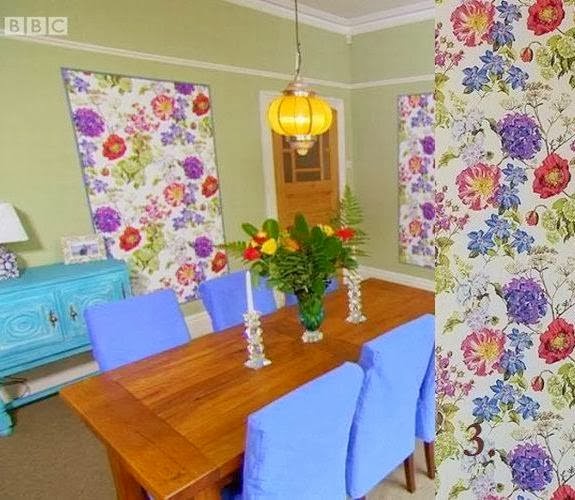 Posted by Emma Kate at Paint and Style at 13:37