Hello old friends and Happy New Year to you. I'm sorry I fell off the face of the earth again. I've had lots of difficult family stuff going on which is draining and I've been not just a bad blogger, but a bad blogging buddy, having failed to keep up with other peoples blogs.

Poor KATIE has had to cope all on her own with the terrible news that her true love, Joe Manganiello has gorn orf and married another woman. And I wasn't there to give a sympathetic virtual shoulder to cry on. Bad friend. Forgive me Katie. The man's a fool. What on earth does he see in her eh?

December is always a busy time. It's a scientific fact that time speeds up in December. I've had a MASSIVE clear out and sold lots of things on eBay which has been very time consuming.

I took a few pictures of the decorations but they're pretty much the same every year... 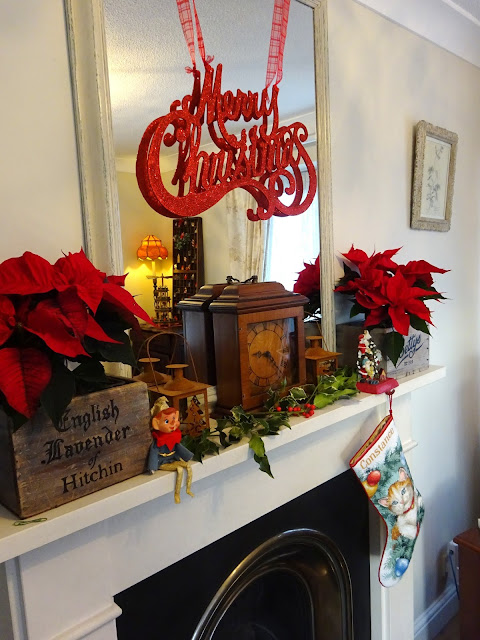 The mantel clock is 'new' to me. 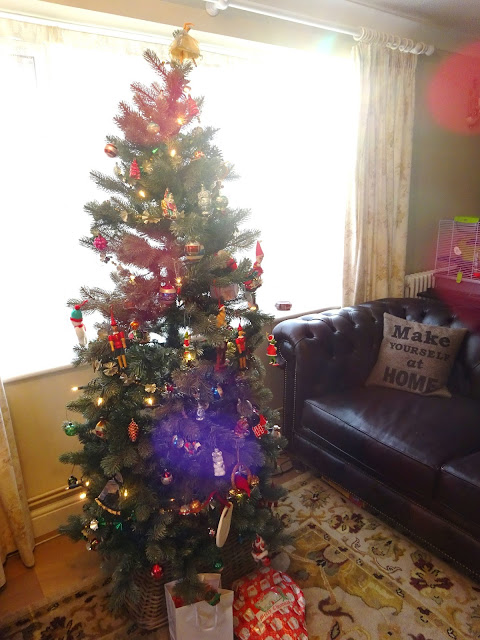 A bit of an improvement on the old... 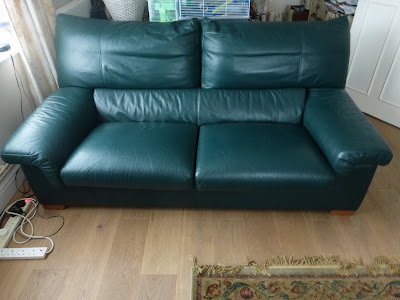 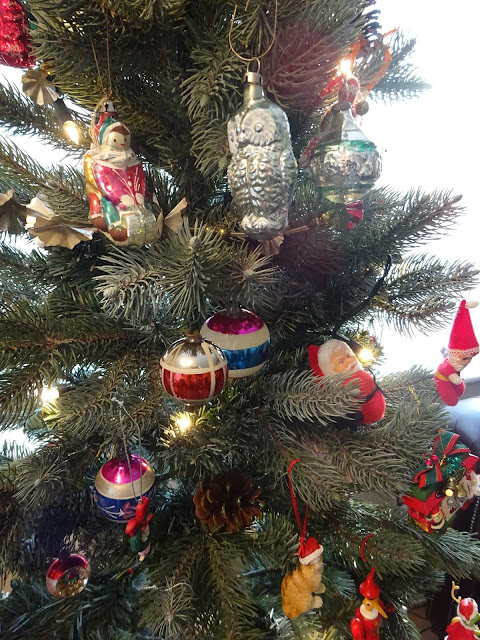 Bauble placement is NOT my own. I'm getting good at letting Connie do it without getting all OCD and frightening her about breakages! I was actually glad of the help as Christmas decorating is a huge task.

This is my favourite part... 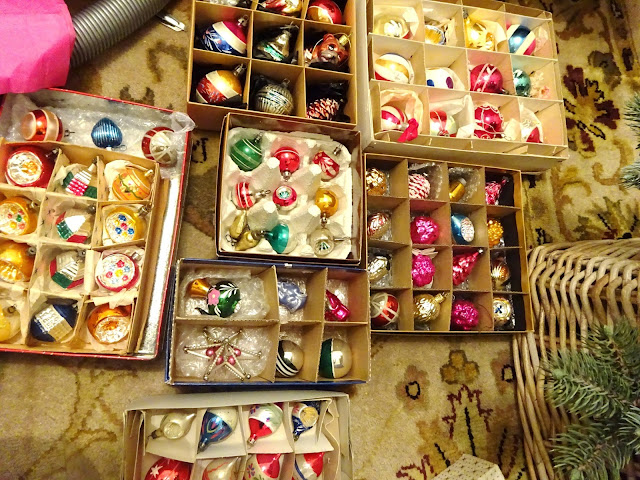 ...opening the boxes to see the treasures I've collected! It's more thrilling than diving into a new box of chocolates!

I found another vintage German Christmas pyramid, this one smaller than the one I had a few years ago, so I passed that one on and kept the small one... 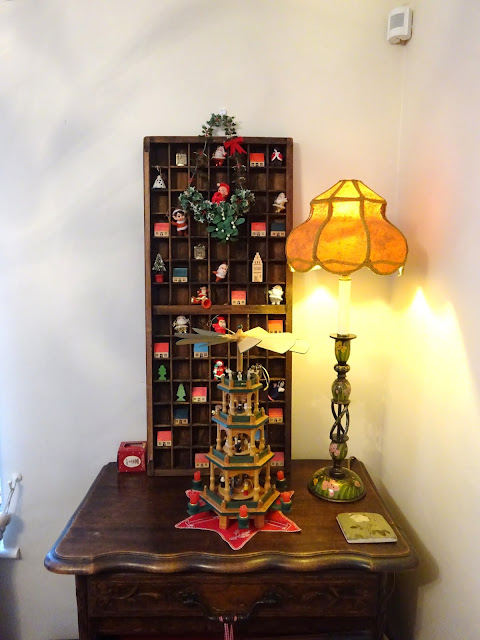 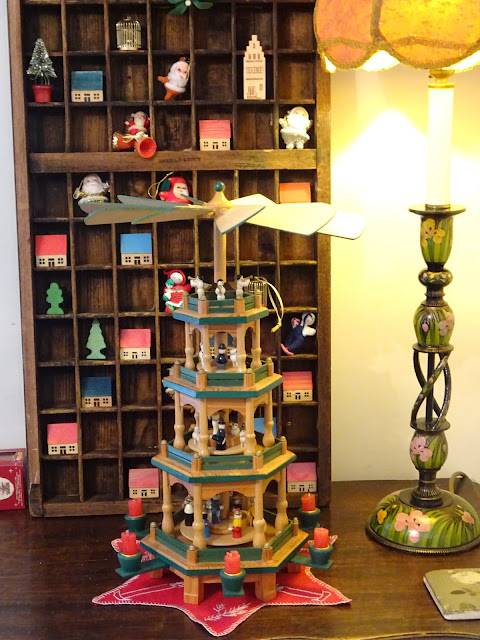 I also found a shade for the lamp above. I only use one of the pair because using two looks like a sacrificial alter, and I was thrilled to find this shade. I mean, it's not beautiful but I like the unusual shape so will probably recover it at some point. At the moment it has a papery shade which I think is fibre glass.
Jason says it looks like it's made from human skin and belongs on the set of Silence of the lambs.

So to freak him out, I drew a nipple on it. 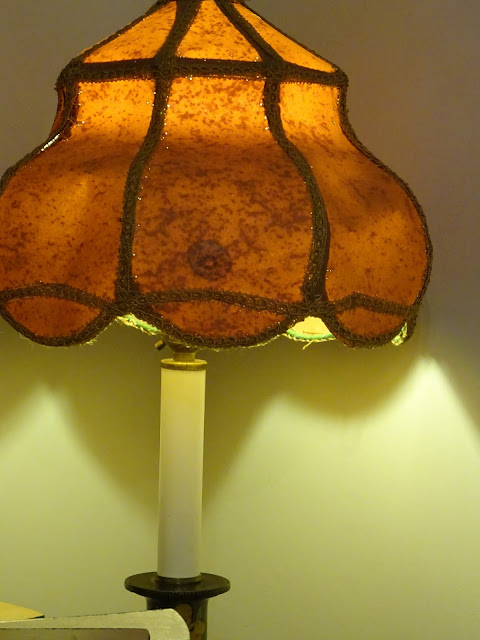 Other naughtinesses have taken place... 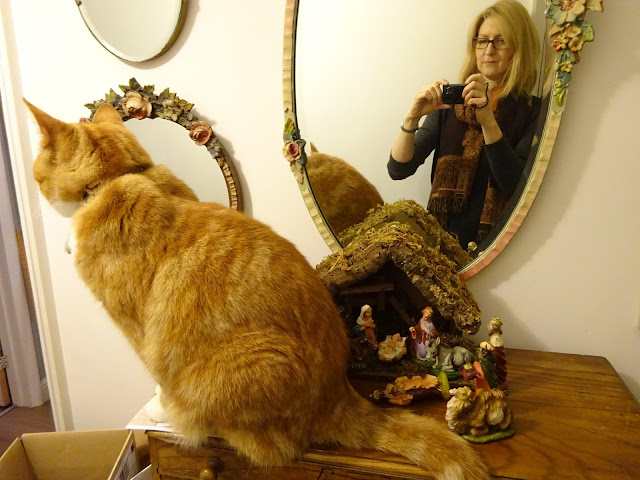 Bad Bobby is a non believer. 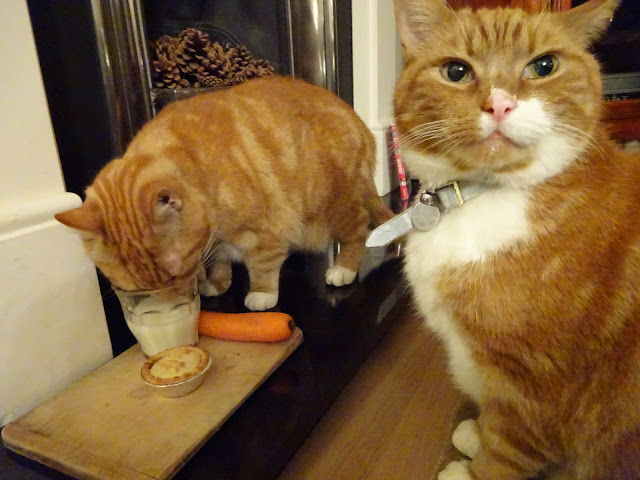 And both he and Fat Freddy found their way onto Santas naughty list.

Christmas was quiet. And sad as my lovely Auntie passed away on Christmas eve.

New Years was more fun with some friends at a Turkish restaurant.

Now, I'm struggling to get used to the brutal alarm clock after a lazy school holiday. And struggling to get back into work mode. First job is THAT wardrobe which remains in the kitchen. As my husband likes to remind me on a daily basis.

I would make a New Years resolution to blog more, but I'd only break it...