Things in the master bedroom haven't run as smoothly as I anticipated.

I started to build the stud wall to separate off the end section for the walk in wardrobe. The ceiling has always been bowed in that room but it felt solid enough. I mean, my father in law and I pushed on it and it didn't move so we thought it was fine. The last thing you want to do is take a ceiling down! Ugh, the mess and devastation! 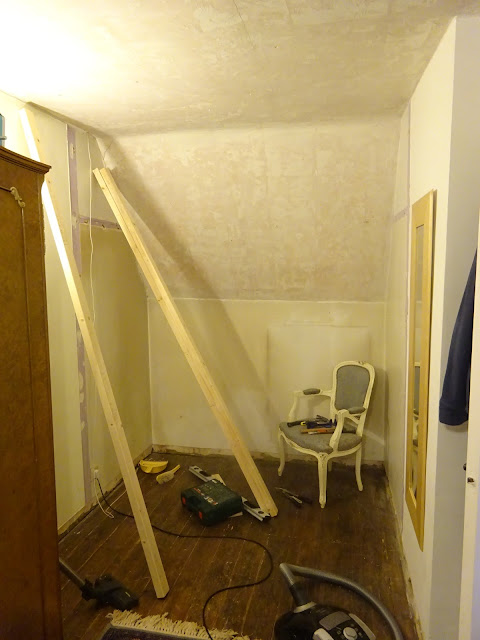 So I started to frame out the wall which was quite tricky when it came to the top. I looked on the Internet to see how to build a stud wall round a bowed ceiling.
Nothing.
That should have been a clue that perhaps this isn't a good idea. 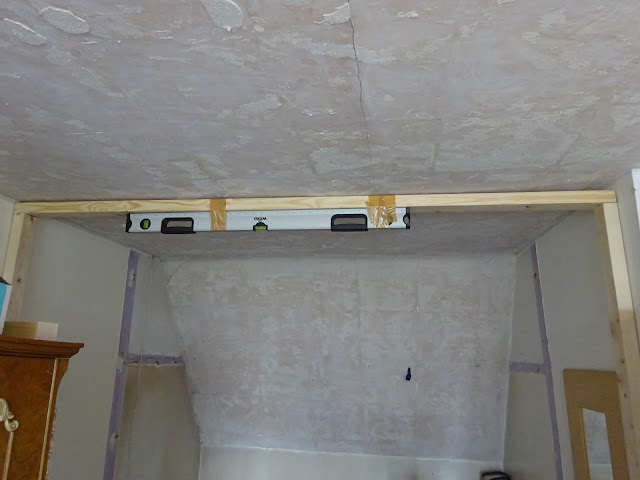 To accommodate the ceiling bow I had to shorten the sides of my stud timbers to get the top sitting level. Then pack out the side gaps.

Parcel tape is the carpenters friend if you are working alone and don't have enough hands! 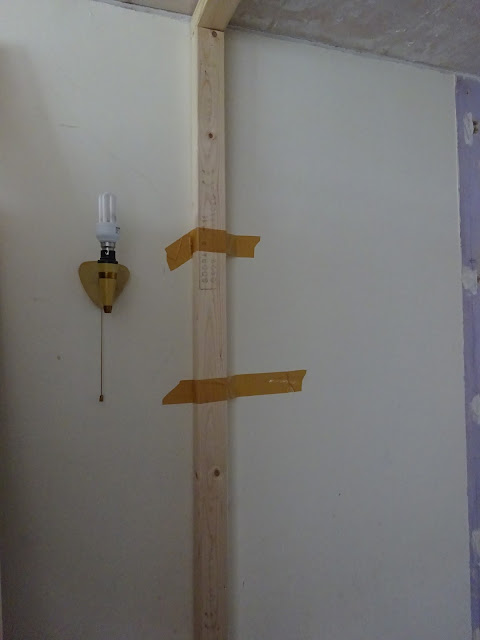 We got the electrician in to remove the wall light you see above and put a central pendant light in the wardrobe space. 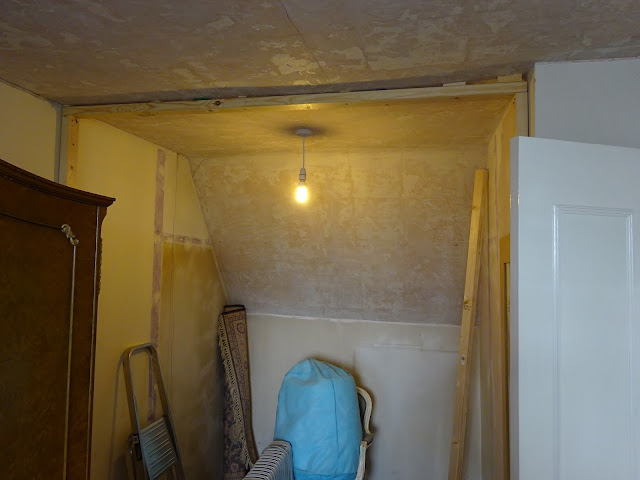 Ta daa! But here's where it all started to go horribly wrong. As I'd had to clear the loft space just above the new light fitting, I thought it would be a good time to board out the loft. We'd done a half arsed job when we moved in but the boards didn't reach the edges so I could gain more storage by doing it properly.

So there I was, toiling away in the loft when I noticed something bad. The loft boards were sliding between the central beam and the ceiling joists below. They are supposed to be tight up to each other. The ceiling was actually dangling in mid air. The boards I had laid looked great but there was a dip in the middle of the floor that you could feel as you walked on it.

We called in a local builder who came highly recommended by a friend. He pushed on the ceiling with one hand and it moved. My husband when up in the loft above and you could see the ceiling bouncing.

We decided the best course of action would be to take the ceiling down, insert a new wooden beam, hoist up the joists as much as we could, strengthen them and put in a new ceiling.

This meant emptying the bedroom and the entire side of the loft above. You can imagine the chaos. There was stuff EVERYWHERE. 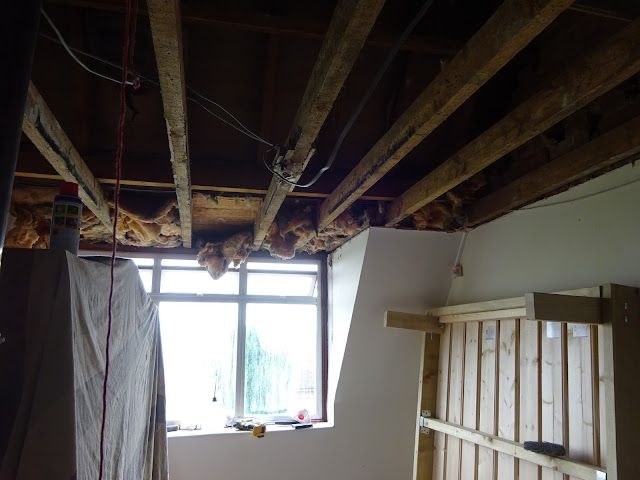 Not to mention dust and fibre glass... 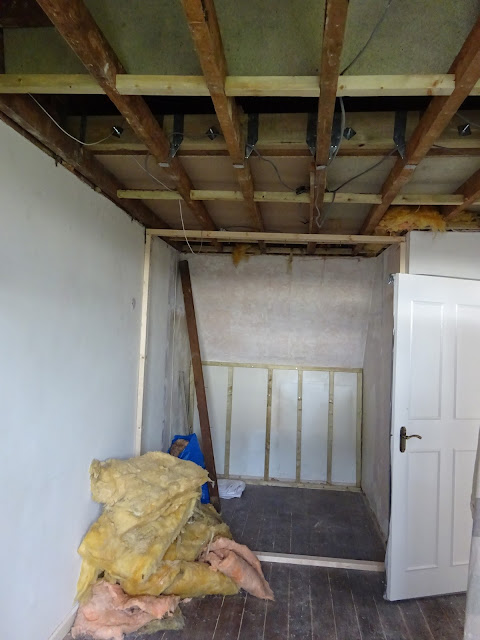 Here you can see the new beam across the ceiling and the shiny new strapping to pull the joists up. 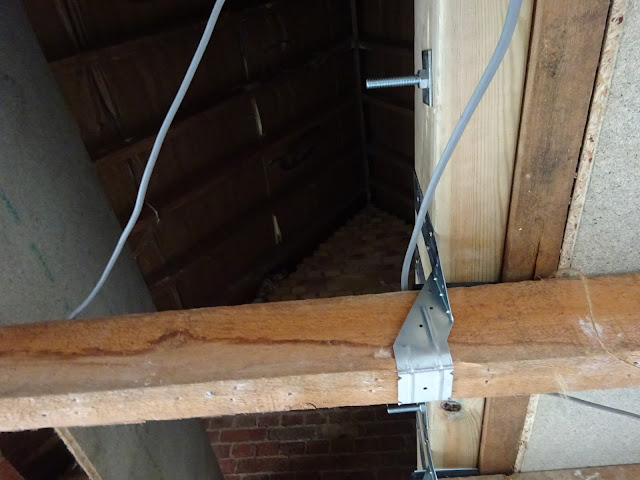 The new beam is far more substantial than the old one! 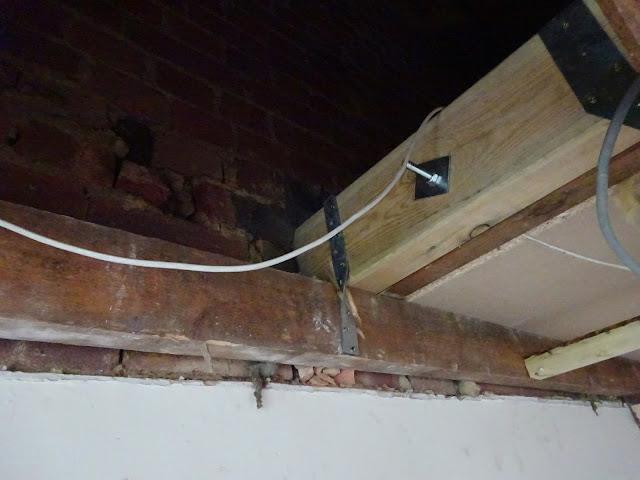 It was cemented into a hole in the brickwork at one end and the other end rests on a solid wall that runs down the depth of the house. The new and old beams were bolted together.

We can jump around in the loft now. That's important.

The ceiling went back up... 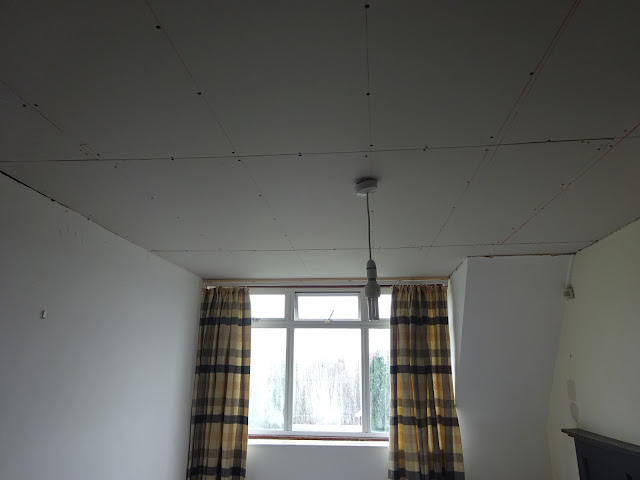 And then before we could plaster, we decided to replace the window which was an old aluminium frame and very badly fogged. If we replaced the window afterwards, it would bugger up the new plasterwork. 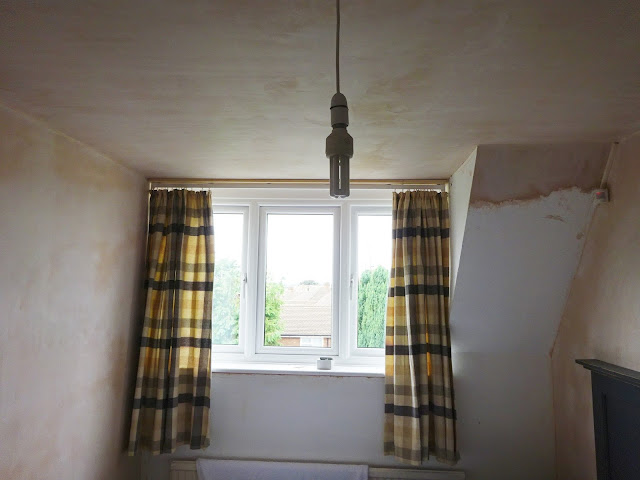 The ceiling works and plastering came to about £1000. The windows (we did the landing one too) came to £1000. This wasn't the worst part. Oh no. There was worse to come.

The builder said he could put up my stud wall in about half an hour. I REALLY wanted to do it. I mean, when am I ever going to get an opportunity to do another one? Never.
But there were things ALL OVER THE HOUSE and I was helping someone out with some childcare so I caved in. For the sake of progress, our sanity and family life I caved.

Rest assured, he put that wall up EXACTLY the way I was going to. But rather faster and without lots of painstaking research into how wide plasterboard is. The builder has all that information in his head as he does this full time. 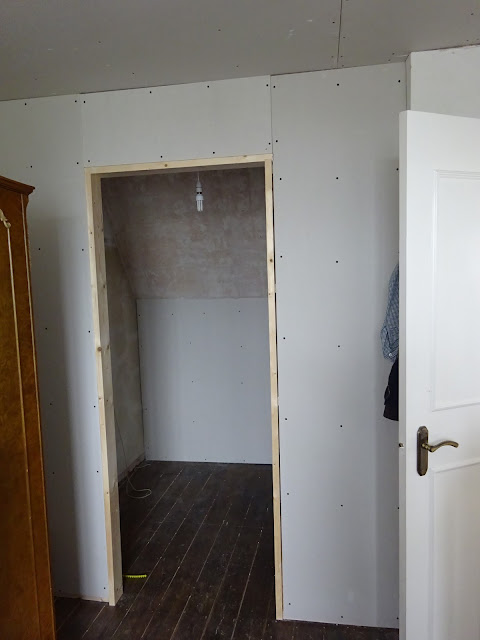 We also battened out, insulated and recovered that lower end wall as it was very cold. I got the builder to leave the other side of the wall open so that I could reinforce the stud work where I'm going to need extra strength for hanging rails.

So. The room was built. Next was the fun part!

The prettifying! Back soon with that...