Do it yourself woman!

We've had a full on week. A weekend in Aylesbury for a family party and then four days at my dads in York. Half term holidays can be a bit frantic.

The kitchen hasn't progressed much and I have a small problem to overcome. Two of the doors hit each other when they open. My lovely doors  are purely decorative at the moment. Such a drag, I need to sand one a bit smaller and hope that works. It's very boring when things go wrong.

I'm just going to write a quick post about Unibonds current advertising campaign. Whilst in York, I saw a full page ad in a magazine for the Unibond Go range of products. It's the first DIY ad I've seen aimed at women. It's about time!

According to sources, women are now doing 60% of  home improvements. They aren't prepared to wait for their husbands to get around to it and don't want to pay for a tradesman. Half of those women who do DIY reckon they're better at it than their blokes.
Single women now own one in five UK households. Do it yourself is no longer just a mans domain. 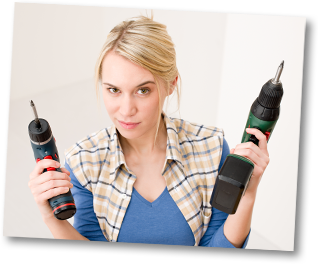 I am so pleased that they're aiming themselves at a female market. I think that up until now, we've only seen women with paintbrushes in their hands.
Anything that gives women the confidence to have a go at DIY is awesome in my book.

Back soon with some cool secondhand finds and 1/4 of a completed kitchen! Woo hoo!

Posted by Emma Kate at Paint and Style at 21:46

Email ThisBlogThis!Share to TwitterShare to FacebookShare to Pinterest
Labels: Unibond