A few weeks ago we noticed that Fat Freddy was getting reckless with his road crossing. We've had the boys just under three years and up until recently they've stayed on our side of the road.
Unfortunately, Freddy made his way over there one day, found the field opposite was full of mice and never looked back.
Or indeed, left and right. 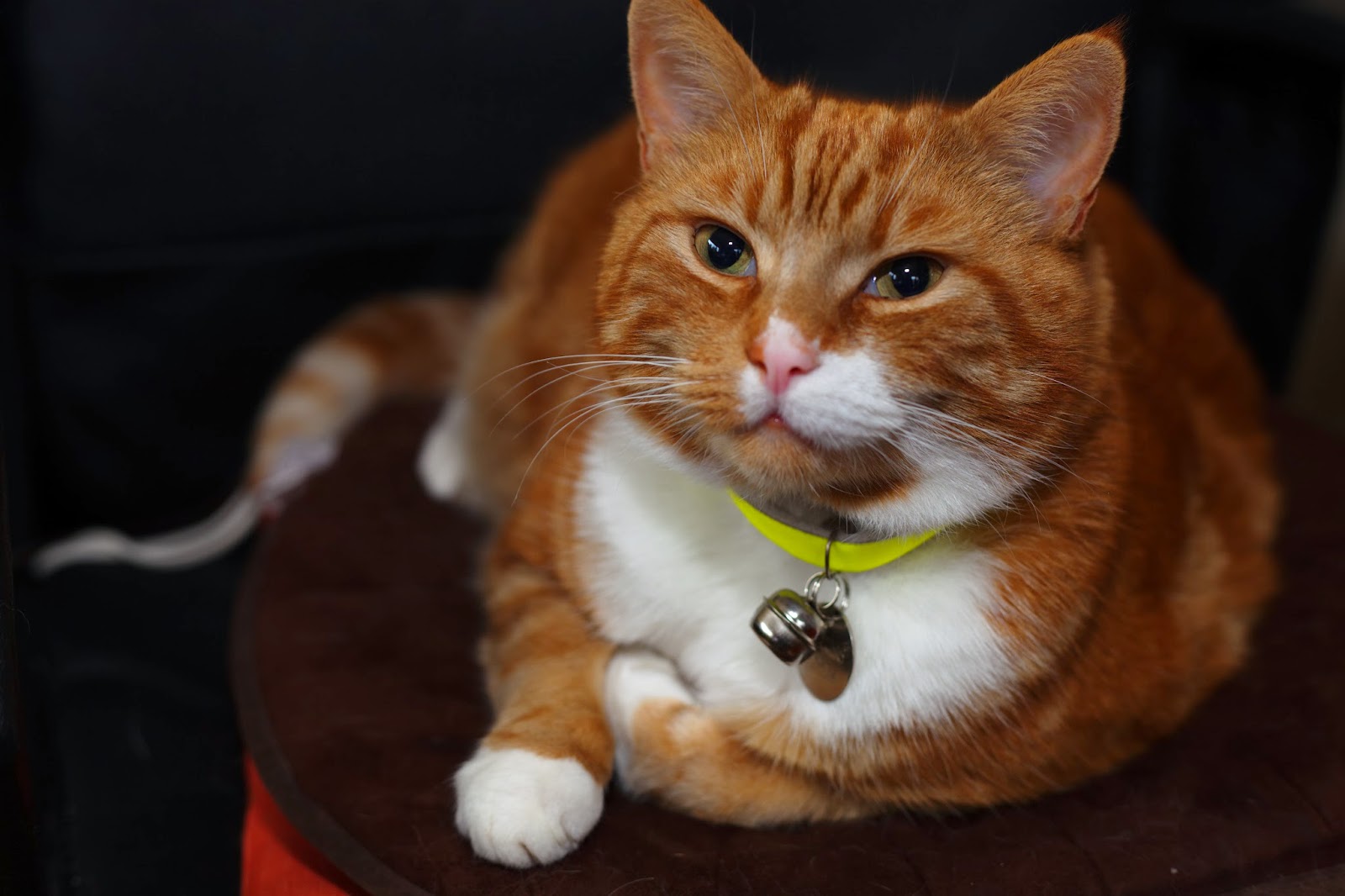 The lure of the mice clearly outweighed the fear he once had for the road. A few weeks ago I started following him when he was let out. Every time, he headed for the road and three times I saw cars having to slow for him. I decided he was an idiot and must be kept in.

My husband wasn't in agreement.  I kept him in for a week and then we had the boys annual check at the vets. I mentioned our disagreement, thinking she would side with me, having to fix up squashed cats all day. She didn't. I said he wouldn't last more than a few weeks.
At half term, Connie and I were away and Jason couldn't take the crying at the door. (He's the pushover parent.) 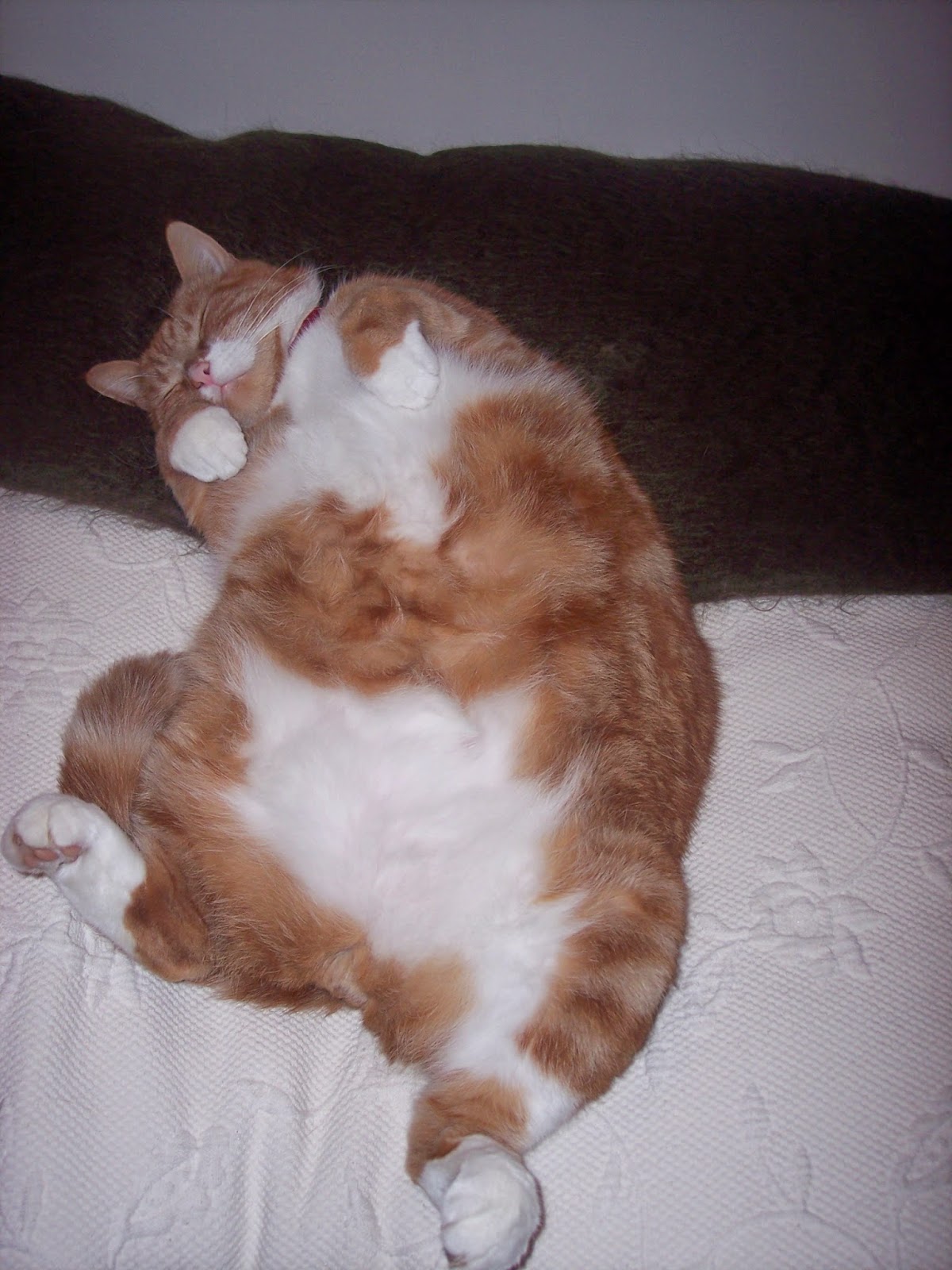 Freddles was allowed out, not during rush hour and not in the dark. We came home, Jason went away and I continued letting him out. I really wasn't happy about it but felt a bit outvoted. And bless him, he seemed so overjoyed when he was allowed out.

On Wednesday I got a knock on the door from a neighbour saying he thought my cat had been hit by a car. I saw him stagger out of the road and collapse. I couldn't find my keys and we have the kind of door that locks you out so I had a complete meltdown. Eventually I got the neighbour to stand in the doorway, so I could retrieve Freddy.

He howled as I picked him up and was bleeding from the mouth. All the cars had stopped on the road and two of the drivers came to see how he was. A lady walked up the path quite gingerly and I asked if she was the one who had hit him. She said she was and I apologised profusely for his stupidity. I don't think she was expecting that.

Everyone was very kind and offered to take me to the vets. I declined as I thought I'd manage. I laid Freddy in his bed, gave myself a mental slap round the face and made arrangements for my daughter to be collected, for the vet to be expecting us and I got the cat basket.

Freddy had staggered a few feet into the dining room and lay there. Despite his apparent injuries he did put up a little fight as I got him into his basket. I took this as a good sign.

Once at the vets, it looked very much like he'd broken three legs and his jaw. The vet managed to x ray his chest that day, as this is the most important area but not his limbs as he wouldn't be positioned.

I left him and had time to collect Connie after all, but I was very upset and she burst into tears when I told her. I also had to tell Jason who was in Berlin. 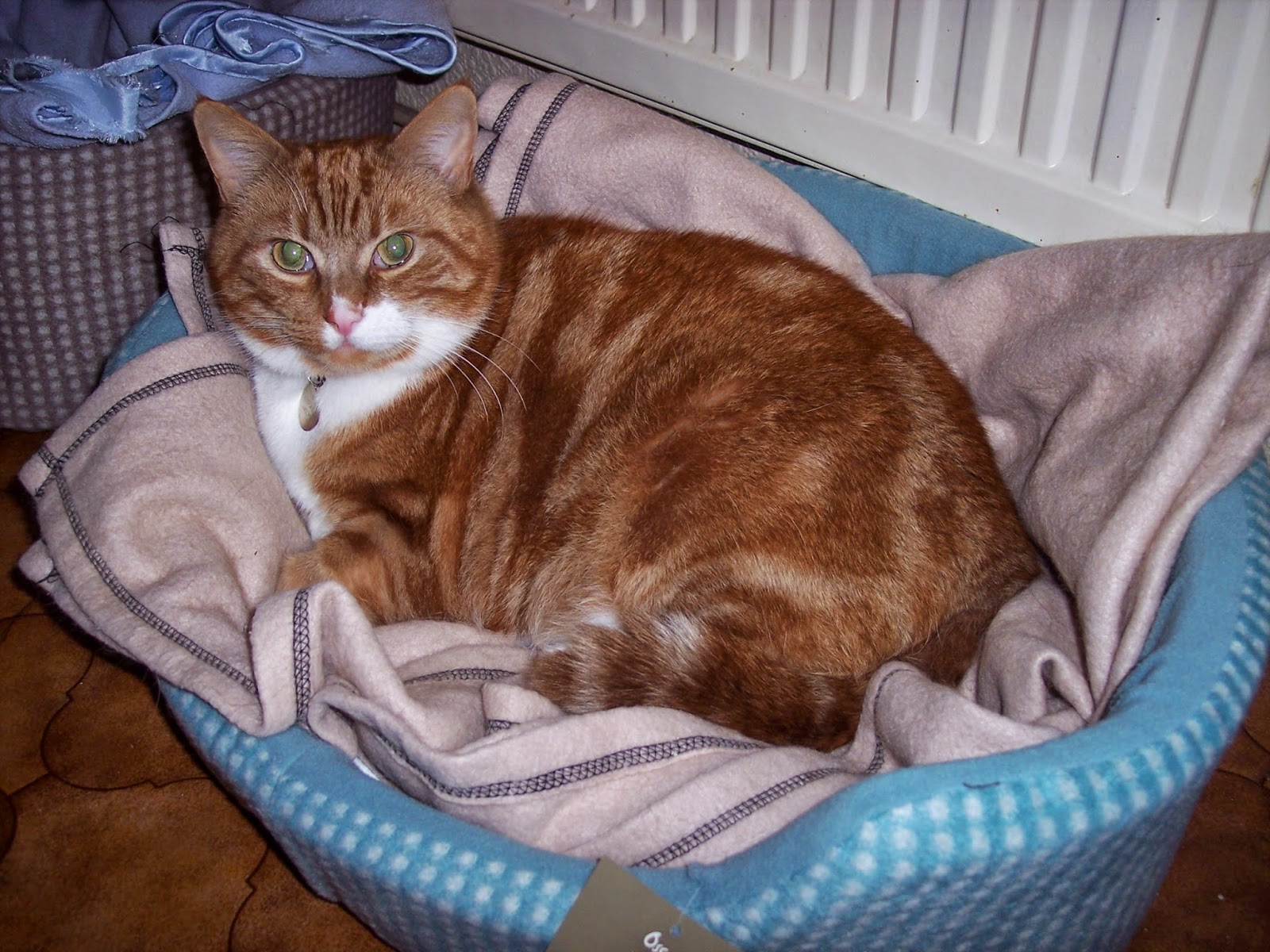 The next day Freddy was anaesthetised and had his limbs, pelvis and skull x-rayed. His lower jaw was the only thing broken so he had that wired up. (It doesn't stop him eating!) We couldn't believe that nothing else was broken and thanked our lucky stars. He was due to come home the next day.

But then the vet noticed he still wasn't walking properly and did some more x-rays just to see if they'd missed anything. No breaks. We brought him home late yesterday and he went a bit beserk. On getting out of his carrier he ran/staggered up the stairs, tried to run down and so almost tumbled. He's wearing a lampshade collar to stop him scratching his wired jaw so he crashes into every doorframe and obstacle. His mobility is like that of a rabbit, a lollopy gait for a few feet and then he has to lie down. His back legs splay and his front legs cross over and trip him up. His head bobs up and down when he walks. Just like a rabbit.

This must be because of the head injury he received. By all accounts he ran into the wheel of the car head first. Head injuries are an unknown quantity. We hope he'll improve as time goes on. He's continent and purrs but is clearly in some pain. He laid down for a rest in his litter tray. Sometimes he can jump onto a chair, sometimes he misses and needs help. 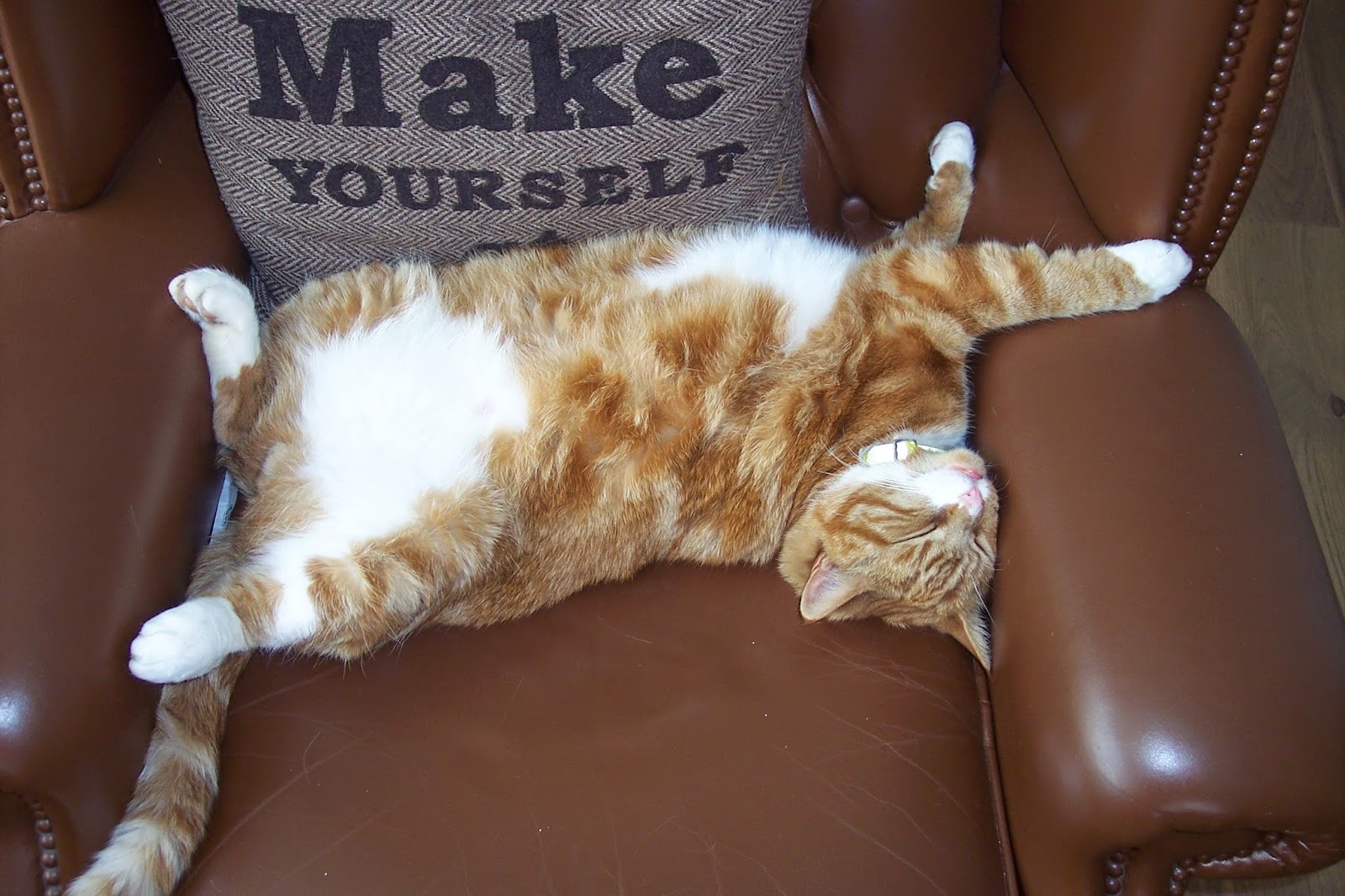 I wish I'd trusted my gut and kept him in. I wish we'd renewed his insurance.

I'm grateful  for the following:
The car didn't go over him.
He didn't cause a car crash.
My neighbour alerted me immediately and I could reach him.

My biggest fear was him causing a crash, finding him squashed and stiff as a board or just having him missing, suspecting the worst but not really knowing. 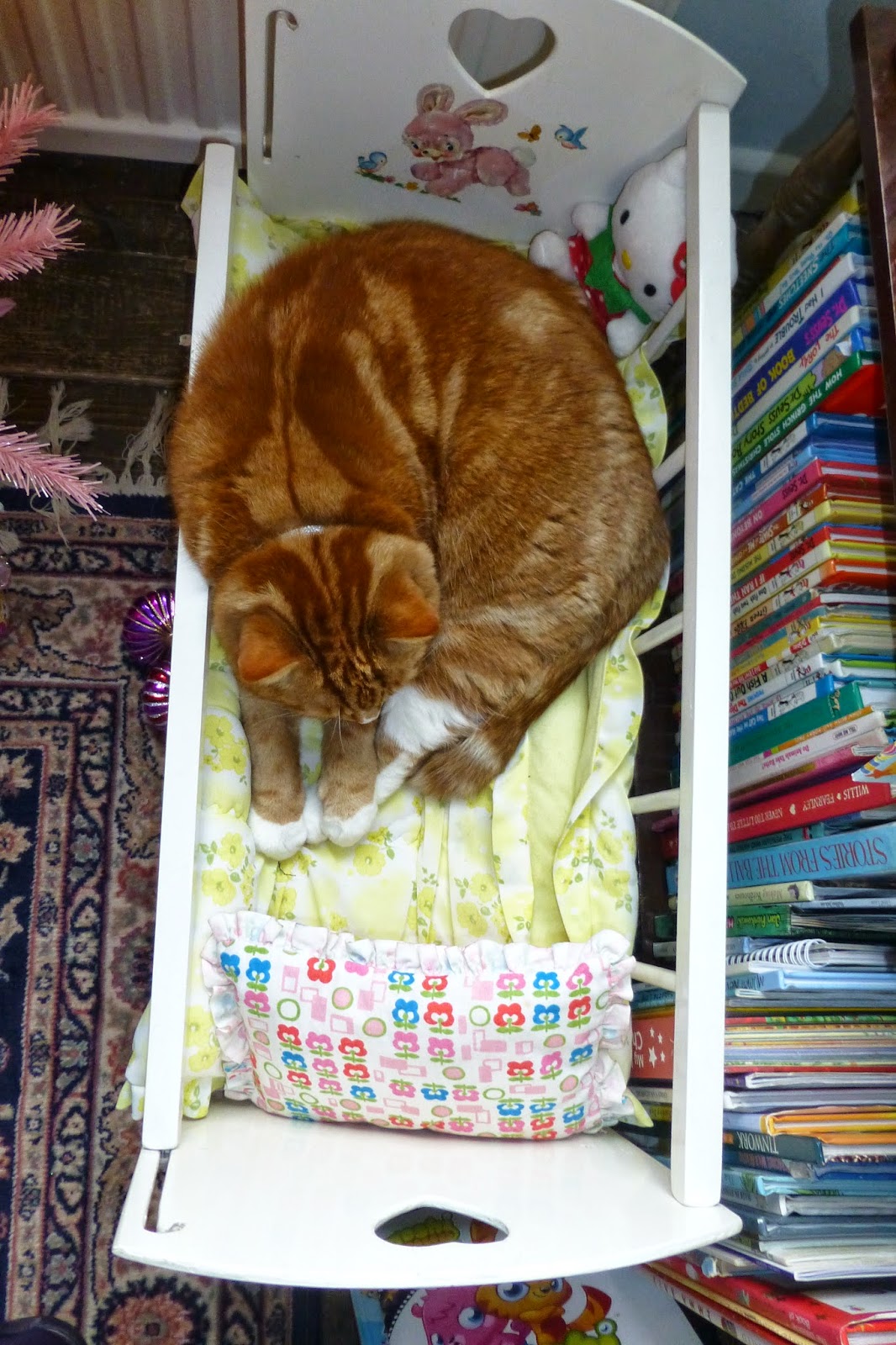 Those of you who have cats might understand what this feels like. You might think I've been irresponsible. Stupid even. You can tell me. Trust me, I can't feel much worse.

Deciding to keep a pet indoors is not an easy decision to make. He might remain brain damaged so that decision might be made for us now.

We're back at the vets next week. Until then Freddy has painkillers, peace and quiet and lots of sleep. When he tries to scratch his head I gently rub the area inside his lampshade. He loves that. 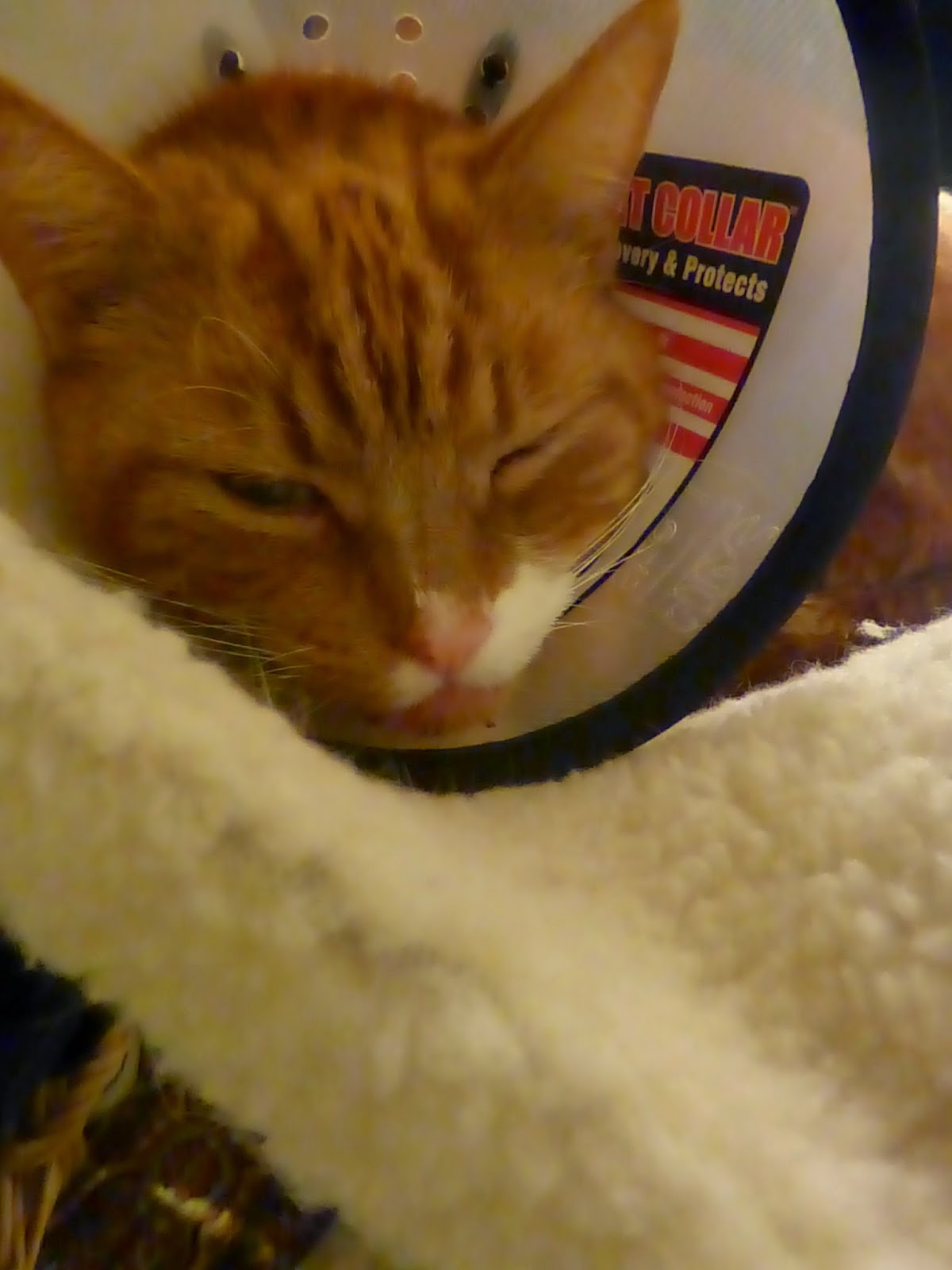 Bad Bobby is completely freaked out by him. He won't go near him. Won't be on the same floor as him. He slept on my bed last night with one eye on the bedroom door in case Freddy came in. He's terrified. I think he wants to run away from home. That doesn't help matters. I hope he'll come around, after all Freddy will be in his lampshade for four weeks.
And a bit of brotherly love might just help the healing process.